This isn't the first article I've read about it, just the latest:

Italian neurosurgeon Sergio Canavero will undertake the first human head transplant later this year in China, the doctor told German magazine Ooom in an article published Thursday. And, following that effort, he will revive a cryogenically frozen brain and transplant it into a donor body within the next three years.


First of all, it's not really a head transplant.  It's a body transplant.  After all, our personalities and cognitive functions are located in our brains.  Our heads are what make us "us," not what's below the neck.  The person getting the transplant is the frozen-brain guy.  And if the surgery succeeds--highly unlikely, but let's speculate for a second--then I suspect he will wake up both angry and insane.  He will probably become homicidal very quickly.  Mary Shelly was an optimist.

As for the story potential...

On the one hand, this is fertile ground for science fiction authors, and it's been explored by them for a long time.  There are all sorts of psychological possibilities here, not to mention the purely physical stuff.  A clever author could write some really bizarre stories in this arena.  And clever authors have.

On the other hand, the idea of human head transplants just creeps me out.  I don't really want to read such stories, and I don't really want to write them.  The stuff in Buddy is about as far as I'm willing to push the human biological envelope, and that was pretty tame by comparison.  So, yeah, as fascinating as it all is in a way, don't expect to see body transplants in my fiction any time soon.

Unless it's done to aliens.  Then it's different.  :D
Posted by Jeff Tanyard at 9:16 PM No comments:

Amazon has it all

We know they sell just about every kind of product under the sun.  But the categories!  That's where the real amazement lies.  For example: 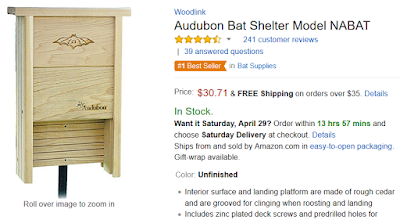 Yep... "Bat Supplies" is an actual category on Amazon.  In addition to a variety of bat houses, the category also sports bat attractant spray and ultrasonic bat detectors.  You can even buy a bat!

Posted by Jeff Tanyard at 9:33 PM No comments:

Also, I just realized I don't have anything in Cities of Mars named after Buzz.  :/  He's a big-time Mars enthusiast, so I might have to change that.
Posted by Jeff Tanyard at 1:10 AM No comments:

Another reason to love Calibre

I already loved Calibre.  Not just for the ebook management and sync-with-kindle stuff, but also for its ability to convert a book into other file formats.  I add a .odt file to Calibre's library, and then I can turn that into a mobi or epub.  Easy-peasy.

What I lacked was a decent epub reader.  I'd been using a Firefox add-on to read epubs, but I wasn't really happy with it.  Recently, though, I discovered that Calibre had a built-in epub reader.  Not an editor, mind you, but a dedicated reader.  (This is either a recent upgrade, or an old feature I simply hadn't discovered it yet.  Who knows...)  So I set it to be the default viewer for epub files.  Now I'm happy.  :)  When I double-click on the Buddy epub, here's what it looks like: 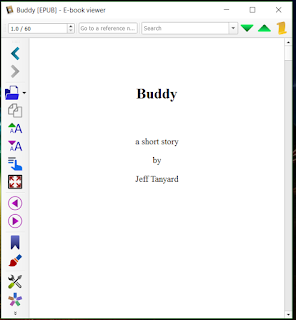 So thanks again, Calibre.  You guys rock.  :D
Posted by Jeff Tanyard at 8:48 PM No comments:

When making one's own covers, title placement, font, and size are things one must consider.  For this reason, I've found it's best to stay flexible on titles until after you've started making the cover.  Because you may decide that some words work better than others.

I'm still playing around with titles for the Wheel of Fire series.  The second book, Neutral Ground, is now Mind Games, but I'm thinking of changing that to Mental Games for reasons relating to typography.

Book 1 is still Hostile Planet, and that won't change.

Of course, this is less important for standalone titles, because then you don't have series-wide branding issues to consider.


Posted by Jeff Tanyard at 6:47 PM No comments:

Been a little under the weather lately.  I'm coming out of it, though, and I think I'm back to normal.  *fingers crossed*

In the meantime, I've progress a little on revision for the trilogy, and I've completed the outline for the third book of the Wheel of Fire series.  I've been playing around with covers, too, trying to see if I can make 'em good enough.  Jury's still out on that.

I usually prefer writing in silence, but sometimes I like a little background music.  It needs to be peppy, though, not relaxing, and it can't have lyrics that distract me.  One thing I like to put on is this:


Completely serious.  Somehow, the lyrics don't bother me.  Whatever the case, I actually write with ten hours of He-Man singing in the background.  Insane, I know.  I have no explanation for my apparent descent into madness.

Less concerning is this:


Yeah.  \m/  Though the robot voice that speaks up a couple of times is kind of lame.

So that's where I'm at.
Posted by Jeff Tanyard at 1:38 AM No comments:

Cities of Mars is out for another round of beta reading

Now I'll focus on Caverns of Mercury and try to get it ready for prime-time.  And I'll have to revisit Clouds of Venus, too, to make sure it's set.  The trilogy is slowly coming together.

I'm also working on the outline for the third book of the Wheel of Fire series.  I have a basic outline for each of the eight books, but those outlines aren't anywhere near good enough.  After writing Hostile Planet, the story's universe has crystallized, and now I know what needs to change in the outlines.
Posted by Jeff Tanyard at 6:36 PM No comments:

Links for The Lattice

Links for Clouds of Venus

Links for Caverns of Mercury

Links for Cities of Mars

Links for The FREE SPACE Trilogy