There's been a good bit of 1980s nostalgia in recent years.  I haven't watched Stranger Things yet, but I've been thinking about giving it a try mainly for the nostalgia.

It all makes me homesick, frankly.  I'm homesick for the decade of my youth.

We didn't have easy availability of music and video that we have now, but that made us appreciate what we did have all the more.  And it left plenty of time for playing outside.  I used to ride my bike all over the place.  Now I haven't even sat on a bike in years.

Anonymity was the default state.  Whatever you did, you could be confident that no one was going to film you doing it.  This enabled mischief, but it also enabled the learning of valuable lessons.  It enabled liberty and growth and the accruing of wisdom.  We learned about living by doing.  Now the Eye of Sauron is everywhere, and we're all scuttling fearfully through our lives like goblins.

Posted by Jeff Tanyard at 11:38 PM No comments:

I mentioned a little more than a month ago that gaps on stock charts tend to want to be filled.  It's one of many old sayings among stock traders.  As old sayings tend to go, they're not right all the time, but they're right often enough for people to notice the pattern.

The broader market did indeed rally to fill those gaps, just as I suspected it might. 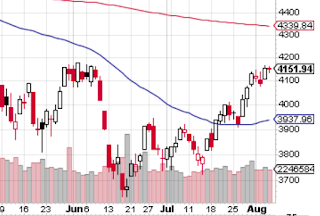 It looks like there's some resistance around 4180 or so.  The MACD is on the high side and the two lines are beginning to converge, so I'd look for the market to begin a decline with the next couple of weeks.

It should be obvious to everyone by now, but I'll say it anyway: we're in a stagflationary environment, and we've been in one for some time.  We need a Paul Volcker, but we don't have one, so we'll be stuck here for a while.

Posted by Jeff Tanyard at 11:04 PM No comments:

I've noticed that there are several dragonflies patrolling the yard now.  In the past, I've only ever seen one or two at a time.  Now I see three or more at a time.

I suppose the mosquito population has something to do with that.  Predators go where the prey are.

Whatever the reason, I'm glad to see them.  I hope they eat every last mosquito out there.

Posted by Jeff Tanyard at 10:47 PM No comments:

The things we see

I noticed something the other night.  I was lying in bed and looking at the ceiling, and I noticed an interesting shadow.  The light from the digital clock's display was causing the ceiling fan to cast a strange shadow on the ceiling.  It looked like the man-eating plant from Little Shop of Horrors.

I've had that clock for several months now.  The previous clock, an old one with a red LED display, stopped working, so I replaced it with one with a bigger, brighter blue-white display.  This was the first time, though--just this week--that I noticed the shadow it cast.

I could have seen that shadow at any time since getting the clock.  All I had to do was look up from my bed while the lights were off.  But I never did.  That shadow has been there these past few months, plainly visible, but I never saw it.

It makes me wonder how many other things like that we miss, things that are in plain sight that we pass by every day but somehow never notice.  Just how fully do we exist in this world anyway?  We're more like characters on a tv show, oblivious to the viewer and everything else in the room in which the television sits.  If we're missing things that are right under our noses, how can we be expected to find things that require a bit more work to reveal?

Next time you're lying in bed at night and getting ready to go to sleep, don't close your eyes just yet.  Take a minute or two to look around.  You might be surprised by what you find.

Some days are better than others

I've had a headache for the past two days.  It hasn't been severe, but it hasn't completely gone away, either, and longevity has a severity all its own.

The past couple of days have seen a lot of rain, too.  That's good.  June was hot and dry, and the ground baked, so we needed it.  The rain hasn't cooled things off much, though, and that's bad.  The high temp for tomorrow is supposed to be 93.

Posted by Jeff Tanyard at 8:31 PM No comments:

Just did some rowing

The past two-and-a-half years have been tough for a lot of people, and I'm no exception.  For me, the ordeal began in late January/early February of 2020 when I developed an abscess in my big toe.  I was unable to wear a proper shoe on that foot for a while, so my freedoms of travel and exercise were restricted.  I was also scared of the possibility of the infection spreading and maybe having to amputate my foot or something.  It was quite distressing.

Then Covid happened, and the lockdowns, and so on and so forth.  At the same time, I was struggling with trying to find a dietary solution to my migraine issues.  I put on weight the past two years, had little energy, and spent a lot of time drowsy and perhaps even in a pre-diabetic state.

So I was dealing with many stressors at once, and I fell out of my exercise habits.

The past few months, though, have seen some improvement.  Not much, but enough to make me think there's some hope after all, that I'm not doomed to continue declining until I die of old age before I'm fifty.

Today, I did something I don't think I've done since before the pandemic.  I did some rowing exercises.

I don't have a rowing machine.  What I do have is an elastic exercise band with a door anchor.  I also have an audio file of the "rowing of the galley slaves" scene from Ben-hur, and I listen to that while rowing.  Moving my arms in time with the hortator's drumbeats from that scene is a heck of a workout.

It was only a couple of minutes of exercise, but I'm feeling pretty blitzed right now.  It's a good feeling, though, and I'm glad I did it.  Hopefully this will be the start of a new habit.

That's the moral of the story: no matter how many times you fall out of an exercise habit, you can always start it up again.

Posted by Jeff Tanyard at 4:30 PM No comments:

After doing some casual woodworking, I'm still very much a novice at it.  Frankly, I suck.  But I've learned what I like and don't like about it, so I thought I'd share.

I like chiseling.  This is my favorite woodworking thing to do.  When I'm chiseling out a mortise, it's sort of a zen thing.  I enjoy using the chisel for paring, too.  I could chisel all day, or at least until my aching back makes me quit.

I really hate sanding.  Even when using a power tool like an orbital sander or sheet sander, sanding still sucks.  It's just the worst, man.

I haven't used my woodburning pen enough to know if I'll enjoy it or not.  Time will tell.  So far, though, using it has been awkward, and I'm not confident at all with it.  I need a lot more practice.

Posted by Jeff Tanyard at 8:17 PM No comments:

Links for The Lattice

Links for Clouds of Venus

Links for Caverns of Mercury

Links for Cities of Mars

Links for The FREE SPACE Trilogy